Some of the llamas that once graced our pastures... 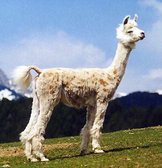 Rebano Escondido Pacifico passed away November 9, 2011.  Caledonia lost our most beloved and easy going stud.  For those who did not ever get to meet Pacifico, he was one grand old gentleman.  So easy going and such a sweetheart!  He will be greatly missed! 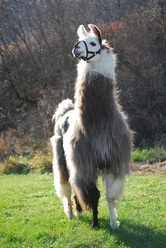 Rebano Escondido was here for the 2009 breeding season!
Rebano Escondido Julio is the stunning male from the 1999 import from South America.  Julio is proving to produce stunning babies with exceptional conformation.  Julio produced some beautiful babies while he was here.  His babies all inherited his uprightness, presence, height and beautiful conformation.  Julio has produced some stunning babies while he was at Pleasure Valley Llamas and now that he is owned by Caru Llamas/Colorfield Llamas.  A couple of Julio's babies have garnered Top Ten's at ALSA Nationals.  He has also produced crias that have taken 3rd and 4th at LFA and 8th at Gold Rush Futurity. 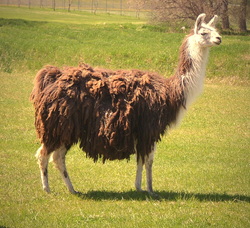 Mya is one of our original purchases.  Mya was part of a herd purchase" of stunning girls from Dakota Prairie Llamas.  Even though Mya is showing her age, she is still a beautiful female with great stretch and conformation.  Mya produces crias that exceed her quality.  Her daughter, Nosey, is definitely part of the next generation of Caledonia Llamas.  Looking at Mya's pedigree is always fascinating.  Her pedigree is full of some of the old foundation llamas of the industry...and they are up close in her pedigree.  Mya integral part of our herd and will live out her days with us.  She is part of our "geri" (geriatric) herd.  She readily excepts the extra TLC!

Bloodlines:  Leon by Dr. Doolittle, Maserti by Fortunato, Poncho Via

Mya passed away October 2011 at the age of 18!  Mya was definitely the queen of the herd and will be missed greatly!  Her dynasty will be carried on by her three daughters that remain in our herd.  Though Mya was not the most beautiful llama in the herd...her babies were second to none!

What a great producer! 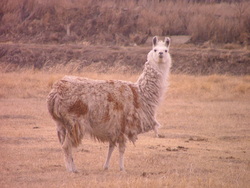 Chaine was another of our original purchases.  Chaine is a "loud" red and white appaloosa.  Chaine has been a great mother.  Chaine passes on her beautiful, fine fiber.  Chaine was repeatedly shown by her previous owner with success.

**Chaine passed away January 29, 2012!  She will be greatly missed!  She was a great asset to the herd and a great producer.  Her best baby was born this year-he was a look-a-like of both his parents.